Bliss of Inner Fire: heart practice of the six yogas of Naropa 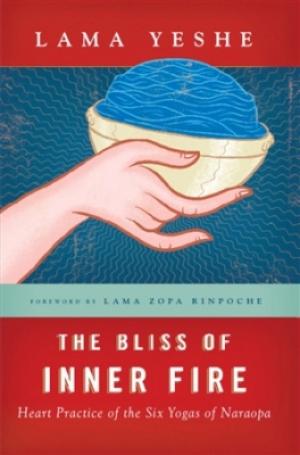 In the classic bestseller, Introduction to Tantra, Lama Yeshe offered a profound yet wonderfully clear glimpse into the authentic and sophisticated practices of Tibetan Buddhist tantra. This present book, the last major teachings of this great lama, opens up the world of advanced practices for Highest Yoga Tantra initiates in much the same way his earlier work opened up the world of tantra in general.

Following Je Tsongkhapa's (1357-1419 a.d.) text Having the Three Convictions, Lama Yeshe introduces the renowned Six Yogas of Naropa, focusing mainly on the first of these six, the practice of inner fire (tummo). Mastery of inner fire quickly brings the mind to its most refined and penetrating state-the experience of clear light, an extra-ordinarily powerful state of mind that is unequaled in its ability to directly realize ultimate reality.

Lama Yeshe felt that twentieth-century Westerners could easily grasp the often misunderstood ideas of this esoteric tradition: "We really need tantra these days because there is a tremendous explosion of delusion and distraction.and we need the atomic energy of inner fire to blast us out of our delusion."

Lama Yeshe's aim was for his students to actually taste the experience of inner fire rather than merely gain an intellectual understanding. Lama's own realization of the transformative power of these practices comes through, inspiring his students to discover for themselves their own capacity for inexhaustible bliss.

ABOUT THE AUTHOR
Lama Thubten Yeshe (1935-1984) was born in Tibet and educated at the great Sera Monastic University. He fled the Chinese oppression in 1959 and in the late 1960s, with his chief disciples, Lama Thubten Zopa Rinpoche, began teaching Buddhism to Westerners at their Kopan Monastery, Kathmandu, Nepal. In 1975 they founded the international Buddhist organization, the Foundation for the Preservation of the Mahayana Tradition (FPMT), which now has more than 200 branches worldwide.

PRAISE
"In a sense, The Bliss of Inner Fire is like a second Introduction to Tantra, opening up the world of Highest Yoga Tantra's advanced practices the way the earlier work opened up the world of tantra in general."—from the foreword by Jonathan Landaw, author of Buddhism for Dummies
"A concise yet detailed experiential teaching based on Tsongkhapa's Having the Three Convictions— a guide to the stages of the profound path of the six yogas of Naropa. If you have studied some sutra and tantra, then you will thoroughly enjoy Lama Yeshe bringing them to life."
—Tibet Journal

In this work, Lama Yeshe, a renowned Tibetan Buddhist master, introduces the Six Yogas of Naropa and focuses mainly on the first of the six, the practice of inner fire, (tummo) so that students experience inner fire directly rather than merely gain an intellectual understanding of the yogic practice."
—Tricycle: The Buddhist Review

"…an impressive contribution to the growing body of Buddhist literature for an English reading audience."—The Midwest Book Review p>"One of the great teachers of our time."
—Sogyal Rinpoche, author of The Tibetan Book of Living and Dying

"Lama Yeshe was capable of translating Tibetan Buddhist thought not only through language, but by his presence, gestures, and way of life. He was a wonderful person who had the unique quality of conveying the true message of the union of compassion and wisdom"
—Gehlek Rimpoche, author of Good Life, Good Death

"Wisdom Publications has put out a wonderful series on Tibetan Buddhism. The Bliss of Inner Fire is one of their best."
—The Review of Arts, Literature, Philosophy, and the Humanities

"Many years ago I heard a Dharma talk by Lama Yeshe. I was very impressed with his ability to communicate deep truths in very ordinary language, with a hilarious sense of humor that helped deliver such wisdom. But he died, so my attention eventually went elsewhere. Recently, I discovered his books—some very technical Tantra; some down-to-earth wisdom. Lama Yeshe's same gift was present in both modes. Although, my many years of Dharma training is in Theravadin Buddhism, especially the practice of vipassana meditation, I found his teaching once again to be of great value—so direct, so clear. Granted, some of his technical Tantra seemed to me, at first, of limited relevance to my interests. But upon closer reading, and in his hands, these teachings proved equally valuable. Lama Yeshe has given us a body of teaching of immense signifciance for practitioners of all schools of Buddhadharma."
—Larry Rosenberg, senior teacher and founder of Cambridge Insight Meditation Center; Senior and guiding teacher, Insight Meditation Society, and author of Living in the Light of Death; and Breath by Breath