Burning Desire: dharma, god and the path of recovery 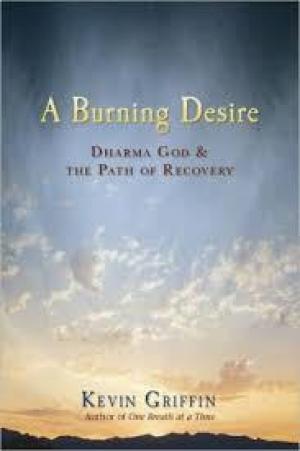 A Burning Desire is a gift for those who struggle with the Twelve Step program’s focus on the need to surrender to a Higher Power. Taking a radical departure from traditional views of God, Western or Eastern, author Kevin Griffin neither accepts Christian beliefs in a Supreme Being nor Buddhist non-theism, but rather forges a refreshing, sensible, and accessible Middle Way. Griffin shows how the Dharma, the teachings of the Buddha, can be understood as a Higher Power. Karma, mindfulness, impermanence, and the Eightfold Path itself are revealed as powerful forces that can be accessed through meditation and inquiry.
Drawing from his own experiences with substance abuse, rehabilitation, and recovery, Griffin looks at the various ways that meditation and spiritual practices helped deepen his experience of sobriety. His personal story of addiction is not only raw, honest and engrossing, but guides readers to an inquiry of their own spirituality. In doing so, he poses profound questions, including:
· How can I understand God from a Buddhist perspective?
· How can I “turn my will and my life over” as a Buddhist?
· How can this idea of God “remove my shortcomings”?
· How do I learn this God’s “will”?

ABOUT THE AUTHOR
Kevin Griffin is the author of "One Breath at a Time: Buddhism and the Twelve Steps" (Rodale Press 2004) and the forthcoming "A Burning Desire: Dharma God and the Path of Recovery" (Hay House 2009). A longtime Buddhist practitioner and 12 Step participant, he is a leader in the mindful recovery movement and one of the founders of the Buddhist Recovery Network. Kevin has trained with the leading Western Vipassana teachers, among them Jack Kornfield, Joseph Goldstein, and Ajahn Amaro. His teacher training was as a Community Dharma Leader at Spirit Rock Meditation Center in Marin County, CA.

Kevin teaches nationally in Buddhist centers, treatment centers, professional conferences, and academic settings. He specializes in helping people in recovery connect with meditation and a progressive understanding of the 12 Steps. His events range from evening classes, to daylong workshops, and long weekend silent retreats. For information on his schedule click here.

Kevin was raised Catholic in Bethlehem, Pennsylvania, the youngest of five brothers. He dropped out of high school in the late sixties to pursue a career as a rock guitarist. In his twenties he lived in New England and played the club circuit until moving to LA in 1979 with an Afrobeat band called Zzebra. When the band crashed and burned, Kevin found Buddhism and began to explore the spiritual life. After getting sober in 1985, he returned to school, earning his BA from UC Berkeley and MFA in Creative Writing from UC Irvine. He began teaching meditation in 1996 while working as a technical writer. He now divides his time between writing, teaching, and family time with his wife and daughter. He still plays and writes music and is currently recording a CD of dharma-related rock songs.