Home » Books » This Is Getting Old: zen thoughts on aging with humor and dignity

This Is Getting Old: zen thoughts on aging with humor and dignity 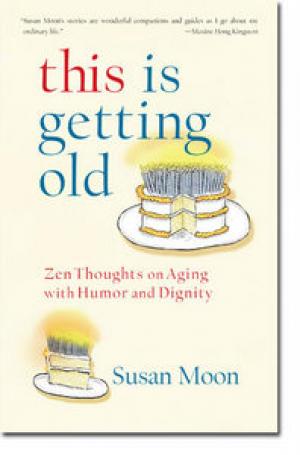 In this intimate and funny collection of essays on the sometimes confusing, sometimes poignant, sometimes hilarious condition of being a woman over sixty, Susan Moon keeps her sense of humor and she keeps her reader fully engaged. Among the pieces she has included here are an essay on the gratitude she feels for her weakening bones; observations on finding herself both an orphan and a matriarch following the death of her mother; musings on her tendency to regret the past; thoughts on how not to be afraid of loneliness; appreciation for the inner tomboy; and celebratory advice on how to regard "senior moments" as opportunities to be in the here and now.

REVIEWS
“Gentle essays . . . Long on dignity. Moon uses detail vividly in her determination to make peace with the many failures of brain and body (from forgetting her Social Security number to wondering if she’ll ever have sex again). Her best writing occurs when memory, emotion, and spirit coalesce as she recovers parts of herself left behind in childhood or comes to terms with solitude.”—Publishers Weekly

“This is a book about aging, but it’s not at all depressing. Susan Moon is a very funny lady. Moon shows us aging in a breathtakingly honest way. I found that I liked her more and more as the book unfolded. This Is Getting Old is beautiful, warm . . . Existential.”
—Wildmind.org

“Moon’s stories are wonderful companions and guides as I go about my ordinary life.”
—Maxine Hong Kingston

“Aging is the biggest issue facing me and everyone I know. This book is poignant, funny, and spot-on, and I am tremendously grateful to Susan Moon for writing it. I love this book!”
—Sylvia Boorstein, author of Happiness Is an Inside Job

"This Is Getting Old is a sweet, mellow, funny, wise, sad, and deeply affecting book. Susan Moon's essays are so disarmingly honest, so personal and plain, that they will make you forget what an astonishingly rare and profound achievement this is."
—Norman Fischer, author of Sailing Home and Taking Our Places

"My first encounter with Susan Moon’s writings was The Life and Letters of Tofu Roshi, which fondly parodied the language, idiom, and culture of the Zen tradition in which Moon practices. It’s the best Buddhist humor writing I’ve come across. That was in 1980, which is 30 years ago, now. That’s a long time. Realizing that makes me feel old, which is appropriate since Moon’s latest book is subtitled “Zen Thoughts of Aging With Humor and Dignity.”

This is a book about aging, but it’s not at all depressing. Susan Moon is a very funny lady. She has a chapter about her family’s history of retinal detachment that includes the following line about contact lenses: “They required at least as much daily care as a small pet–a canary or hamster–without providing any companionship.” I can imagine those words coming from the lips of David Sedaris. Even the title of the book is a lovely, playful double-entendre. This is aging. This is what getting old’s like. And it’s getting old. I especially loved the opening to the final chapter, “This Vast Life”:

“Every morning, I vow to be grateful for the precious gift of human birth. It’s a big gift, and it includes a lot of stuff I never particularly wanted for my birthday. Some of the things in the package I wish I could exchange for a different size or color.”

Moon herself would say she’s a very funny “old lady,” although I don’t tend to think of late-60s as being old these days. Still, she’s 30 years older than when she wrote Tofu Roshi, and she describes in meticulous detail the kinds of changes that have taken place in her body and mind since then — hair graying, bones thinning, memory failing — and that’s a lot to deal with. Moon has almost two decades on me, but I’m already starting to experience my body as aging. From that point of view, This Is Getting Old is a good reminder, to people who aren’t yet old, of what’s in store for them.

The Buddha said that in his youth he was “intoxicated with youth,” and don’t we all, in our younger days, see old age as something that will never happen to us — not because we plan to die young, but because we think of old age as a personality defect, or we think of elderly people as having always been that way. Perhaps Moon’s book will find itself mainly in the hands of “boomers,” but that would be a shame. Anyone interested in Buddhism, whose key teaching is impermanence, would appreciate this up-close portrait of what’s in store.

This Is Getting Old is a collection of essays on different topics more or less related to aging. Mostly the stories focus on Moon herself, but there’s a particularly moving chapter (“The Breathing Tube”) about her mother’s car accident, and her death after three undignified weeks in hospital. There’s a coda to that story in a a later chapter (“Talking to My Dead Mother”) in which we learn that Moon had just finished the final edits to a book her mother had written–only three weeks before the crash. Moon’s mother never got to see her own book in print. That’s painful to hear, but it reminds us that death is like that — it doesn’t wait until you’ve wrapped everything up before it takes you away.

There’s a chapter about depression called “I Wasn’t My Self,” which initially struck me as being rather tangential to the theme of aging. Depression, after all, can strike at any age, and Moon was far from elderly in the several years she dipped in and out of that experience. But in retrospect it’s an essential chapter. This Is Getting Old is pervaded by the theme not just of aging, but of loneliness. In fact, of the two, loneliness may be the more dominant, since much of the content is about what it’s like to no longer be desirable, to know that you may never have sex again (and, more importantly, not to have someone with whom you can have sex), what it’s like to end a relationship and have the thought “I’ll die alone” taunt you day after day. Moon’s depression seems to have been her strongest experience of the loneliness that still haunts her in her 60s.

This Is Getting Old is an aubiographical book. I say this just to be clear that it’s not a series of reflections on aging treated as an impersonal phenomenon. Moon shows us aging rather than tells us about it, and she shows us in a breathtakingly honest way. She’s very open about the pain she’s experienced at various times in her life. And she never seems nasty, even when she’s talking about people giving her a hard time, like her mother driving her mad with disparaging comments about her hair. And, as I mentioned, she’s very, very funny. I found that I liked her more and more as the book unfolded.

I’ve just finished a book on the six element practice, which teaches us about impermanence and not-self, and I wish I’d had the opportunity to read Moon’s beek earlier. She has some beautiful passages on the elements:

“There’s no empty space. The air is fluid, making room for us, so that each of us inhabits a nook that is exactly our size and shape. The air kindly moves with us when we move … We’re all connected, molecule to molecule. I’m held by everything that’s not me.”

This Is Getting Old is beautiful, funny, warm, honest, and existential — what’s not to love?"