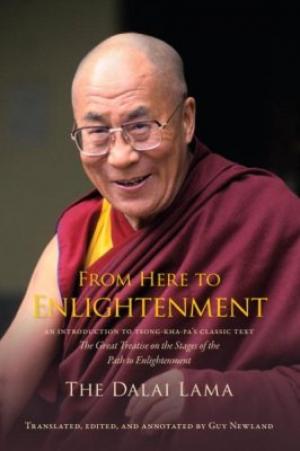 When the Dalai Lama was forced to go into exile in 1959, he could take only a few items with him. Among these cherished belongings was his copy of Tsong-kha-pa’s classic text The Great Treatise on the Stages of the Path to Enlightenment. This text distills all of the essential points of Tibetan Buddhism, clearly unfolding the entire Buddhist path to enlightenment.

In 2008, celebrating the long-awaited completion of the English-language translation of The Great Treatise, the Dalai Lama gave a historic six-day teaching at Lehigh University to explain the meaning of this classic text and to underscore its importance. It is the longest teaching that he has ever given to Westerners on just one text, and Westerners have never before had the opportunity to receive such a complete teaching that encompasses the totality of the Buddhist path from the Dalai Lama. From Here to Enlightenment makes the teachings from this momentous event available for a wider audience.

REVIEWS
“From Here to Enlightenment presents the first-ever complete exposition by the Dalai Lama in the West of the great Tibetan classic Tsong-kha-pa's Great Treatise on the Path to Enlightenment. In producing this volume, Guy Newland has undertaken a fresh translation of the Dalai Lama’s teachings with care, diligence, and insight, resulting in a rare work in English on Tibetan Buddhism that is lucid, engaging, and a real joy to read. I recommend anyone interested in engaging with Tsong-kha-pa’s great classic to first read From Here to Enlightenment.”
—Thupten Jinpa, Ph.D., principal English translator to the Dalai Lama and author of The Essential Mind Training

“Among the Dalai Lama’s many pedagogical skills, one of the most impressive is his ability to provide compelling commentary on the classical treatises of Indian and Tibetan Buddhism. Among Tibetan treatises, there is none more famous than Tsong-kha-pa’s Lam Rim Chen Mo. Here, in ways that are at once accessible, insightful, and illuminating, His Holiness sets forth a text that he has studied since he was a child in the Potala, a text that he knows like no other.”—Donald Lopez, Arthur E. Link Distinguished University Professor of Buddhist and Tibetan Studies, University of Michigan

“Tsongkhapa’s Great Treatise on the Stages of the Path is one of the great classics of world spirituality. An encyclopedic work, it guides the reader from the contemplations of the novice to the most sublime meditations of the expert. The greatest living heir to the intellectual and spiritual legacy of Tsongkhapa, no one is better equipped to introduce readers to the Great Treatise than His Holiness the Dalai Lama. Deeply profound, and yet interspersed with the Dalai Lama’s characteristic wit and humor, this book brings Tsongkhapa’s book to life. Six hundred years may have elapsed since the writing of the Great Treatise, but the Dalai Lama shows how very relevant Tsongkhapa’s thought is even in the 21st century.”
—José Cabezón, XIV Dalai Lama Endowed Chair in Tibetan Buddhism and Cultural Studies, University of California, Santa Barbara

“In this concise commentary to Tsong-kha-pa’s masterwork, Great Treatise on the Stages of the Path to Enlightenment, His Holiness the Dalai Lama draws on his vast erudition, while at the same time speaking as a true spiritual friend, sharing his personal insights and many experiences from his own past. Reading this work is like sitting in the presence of His Holiness, warmed by his unique fusion of wisdom and compassion, as he reaches out to his readers as spiritual brothers and sisters. This is a book to treasure, to be read and pondered again and again as he guides us unerringly on the path to enlightenment.”
—B. Alan Wallace, Ph.D., President, Santa Barbara Institute for Consciousness Studies

“In his Great Treatise on the Stages of the Path to Enlightenment, the Tibetan master Tsong-kha-pa organized the accumulated wisdom of Indian Buddhism into a lucid and detailed manual for practice. In From Here to Enlightenment, His Holiness the Dalai Lama has in turn—and with typical clarity, humanity, and humor—distilled the essence of the Great Treatise into a brief and accessible yet profound teaching which links Tsong-kha-pa’s text not just to its Indian forerunners and the issues of his own time but to the concerns of contemporary Buddhists as well.”
—Roger R. Jackson, Professor of Asian Studies and Religion, Carleton College