Home » Books » Just This Is It: Dongshan and the Practice of Suchness

Just This Is It: Dongshan and the Practice of Suchness 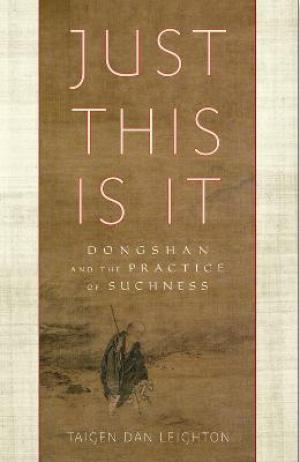 The joy of “suchness”—the absolute and true nature inherent in all appearance—shines through the teachings attributed to Dongshan Liangjie (807–869), the legendary founder of the Caodong lineage of Chan Buddhism (the predecessor of Sōtō Zen). Taigen Dan Leighton looks at the teachings attributed to Dongshan—in his Recorded Sayings and in the numerous koans in which he is featured as a character—to reveal the subtlety and depth of the teaching on the nature of reality that Dongshan expresses. Included are an analysis of the well-known teaching poem “Jewel Mirror Samadhi” and of the understanding of particular and universal expressed in the teaching of the Five Degrees. “The teachings embedded in the stories about Dongshan provide a rich legacy that has been sustained in practice traditions,” says Taigen. “Dongshan’s subtle teachings about engagement with suchness remain vital today for Zen people and are available for all those who wish to find meaning amid the challenges to modern life.”

PRAISE
“What a delight to have this thorough, wise, and deep work on the teaching of Zen Master Dongshan from the pen of Taigen Dan Leighton! As always, he relates his discussion of traditional Zen materials to contemporary social, ecological, and political issues, bringing up, among many others, Jack London, Lewis Carroll, echinoderms, and, of course, his beloved Bob Dylan. This is a must-have book for all serious students of Zen. It is an education in itself.”—Norman Fischer, author of Training in Compassion: Zen Teachings on the Practice of Lojong

“A masterful exposition of the life and teachings of Chinese Chan master Dongshan, the ninth-century founder of the Caodong school, later transmitted by Dōgen to Japan as the Sōtō sect. Leighton carefully examines, in ways that are true to the traditional sources yet have a distinctively contemporary flavor, a variety of material attributed to Dongshan. He is masterful in weaving together specific approaches evoked through stories about and sayings by Dongshan to create a powerful and inspiring religious vision that is useful for students and researchers as well as practitioners of Zen. Through his thoughtful reflections, Leighton brings to light the panoramic approach to kōans characteristic of this lineage, including the works of Dōgen. This book also serves as a significant contribution to Dōgen studies, brilliantly explicating his views throughout.”—Steven Heine, author of Did Dōgen Go to China? What He Wrote and When He Wrote It

“In his wonderful new book, Just This Is It, Buddhist scholar and teacher Taigen Dan Leighton launches a fresh inquiry into the Zen teachings of Dongshan, drawing new relevance from these ancient tales. His inclusive and wide-ranging commentary applies these ancient Tang dynasty teachings of sentience and suchness to the problems of materialism and climate change that we face on our planet today. Time-traveling from Dongshan to Dōgen to Bob Dylan by way of Rimbaud and others, Leighton’s approach brings this old Zen ancestor to life with immediacy and intimacy, strengthening our vital connections through lineage and across time.”—Ruth Ozeki, author of A Tale for the Time Being