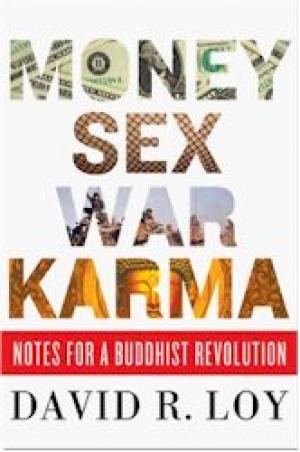 What's Wrong with Sex? * How to Drive Your Karma * Consciousness Commodified * The Karma of Food * The Three Poisons, Institutionalized * Why We Love War
These are just some of the chapters in this brilliant new book from David R. Loy.

In little time, Loy has become one of the Buddhist worldview's most powerful advocates, explaining like no one else its ability to transform the sociopolitical landscape of the modern world.

In this, his most accessible work to date, he offers sharp and even shockingly clear presentations of oft-misunderstood Buddhist staples-the working of karma, the nature of self, the causes of trouble on both the individual and societal levels-and the real reasons behind our collective sense of "never enough," whether it's time, money, sex, security… even war.

Loy's "Buddhist Revolution" is nothing less than a radical change in the ways we can approach our lives, our planet, the collective delusions that pervade our language, culture, and even our spirituality.

REVIEWS
"A work of deep and urgent relevance."
—Ethan Nichtern, author of One City: A Declaration of Interdependence

"When a room gets stuffy and enclosed, it's good to open a window. David Loy does better than that - knocking out entire walls to let fresh thought and insight flow in. I know of no other book that holds more promise for the survival and relevance of Buddhism in the modern world."
—Lin Jensen, author of Bad Dog!, Pavement, and Together Under One Roof

”This book is revolutionary! The clear and concise explanations of Buddhist perspectives on rarely approached topics such as sex, war and money are an inspiration. If you are interested in personal or societal change, this is a book you need to read.”
—Noah Levine, author of Against the Stream and Dharma Punx

"David Loy is a subversive, undermining our cherished opinions and revealing a revolutionary world of human possibility. He describes an emerging Buddhism that speaks to the Western heart and mind and offers hope in a world that has too little. Long live this revolution!"
—James Ishmael Ford, author of Zen Master WHO?

"David Loy's Money, Sex, War, Karma: Notes for a Buddhist Revolution might have a flashy title, but it is a serious and substantial book that poses real challenges to the reader. The book builds on a theme that Loy has working on for several of his last books—namely, that the three poisons are so intricately built into our society (greed in the market economy, anger in the military industrial complex, and delusion in the fame-chasing omnipresent commercial media) that awakening needs to happen in the social as well as the personal realm. This places the book firmly in the realm of Engaged Buddhism. However, its overarching theme concerns how to ensure that the Buddhadharma survives and flourishes in the West. Loy argues with conviction that in order to have relevance in the West, the dharma must find the middle way between its many traditional Asian forms and the contemporary Western feel-good consumerism that characterize much of today's spiritualism."
—Buddhadharma magazine

“For Loy, Buddhism is not just some gentle spiritual path; it’s a tool for social criticism and change. But the revolutionary sword cuts both ways, and just as the West needs Buddhism, says Loy, a living, vital Buddhism also needs the West. “Buddha was more flexible and open-minded than the institutions that developed to preserve his teachings,” he writes. “Today we find ourselves in a situation where that flexibility needs to be recovered.”
—Shambhala Sun magazine

"Loy's thought provoking book has wide appeal: for people not so familiar with Buddhist thought and practice his emphasis is on why this 2500 year old religion is relevant today. For seasoned Buddhist practitioners, the book keeps us from thinking too small. Loy's analysis is a challenge to practice in the world wholeheartedly."
—Mountain Record

"Money, Sex, War, Karma is not a manifesto or call to arms but rather a book that puts the power in the readers hands to evaluate how best to be a socially engaged individual, awakening to the potential of what it means to be human in this age."
—TMcG blog

"David Loy’s is an urgent and vital voice, and his latest work is a thoughtful, passionate, and bold sweep through major issues that face us individually and collectively. I strongly recommend it. "Probably the most thought-provoking book on Buddhist themes that I have read for several years."
—Tricycle Editors blog

ABOUT THE AUTHOR
David R. Loy's previous books include the acclaimed The Great Awakening: A Buddhist Social Theory and The Dharma of Dragons and Daemons, a finalist for the 2006 Mythopoeic Scholarship Award. He is the Besl Professor of Ethics/Religion and Society at Cincinnati's Xavier University.