Home » Books » Tibetan Yoga of Movement: the art and practice of yantra yoga

Tibetan Yoga of Movement: the art and practice of yantra yoga 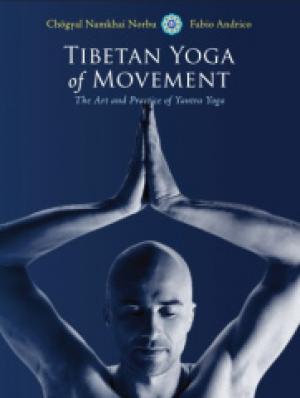 Tibetan Yoga of Movement introduces the method of Yantra Yoga, a traditional Tibetan form that is one of the oldest recorded systems of yoga in the world. Derived from an eighth-century Tibetan Buddhist text, Yantra Yoga includes many positions similar to those of Hatha Yoga in form, but different in the dynamics of the way in which they are practiced, especially in the coordination of movement and breathing. The Yantra Yoga system encompasses 108 sets of movements (yantras) and several types of breathing to be learned at your own pace. Due to its emphasis on uniting breathing and movement, Yantra Yoga can deepen the experience of yoga practitioners from any tradition and profoundly benefit anyone seeking authentic balance, harmony, and the understanding of our true nature.

Since the eighth century, this yoga teaching has been passed down from teacher to student in an unbroken lineage. Chögyal Namkhai Norbu, the current lineage holder, began transmitting Yantra Yoga in the West in the 1970s. Presenting detailed instructions accompanied by over 400 instructional photos, the book describes the sequences of movements, methods of breathing, and the concrete health benefits of the practice.

ABOUT THE AUTHOR
Born in Eastern Tibet in 1938, Chögyal Namkhai Norbu is an internationally known Dzogchen Buddhist teacher and author. The direct descendant of the first Dzogchen Tibetan master of Tibet, Norbu spent his childhood receiving many teachings from masters of various traditions. In the 1960s he was invited to teach in Italy. During his career he wrote many books on Tibetan culture and Dzogchen Buddhism. He is the founder of two nonprofit organizations including the Shang Shung Institute for Tibetan Studies, which is dedicated to the preservation of Tibetan culture.

Born and raised in Italy, Fabio Andrico is an internationally recognized expert in the unique tradition of Tibetan yoga known as yantra yoga. Currently a hatha and yantra yoga instructor and teacher trainer, he studied directly under Tibetan scholar and Dzogchen master Chogyal Namkhai Norbu.

REVIEWS
"Yantra Yoga is a profound movement practice that encompasses the coordination of the breath with movement in a way that creates flexibility and harmony within the whole being. Transmitted in an authentic lineage from an ancient tantra, this practice is amazingly beneficial. I highly recommend this book."
—Lama Tsultrim Allione, author of Women of Wisdom and Feeding Your Demons

"Chögyal Namkhai Norbu is one of the greatest Tibetan meditation masters and scholars teaching in the West."
—Lama Surya Das, author of Awakening the Buddha Within and Awakening the Buddhist Heart, and the founder of the Dzogchen Foundation in Massachusetts

"Tibetan Yoga of Movement deliberately focuses on the aspects of the practice that are readily accessible to everyone, independent of their views, ideals, aspirations and capacities. The book provides clear instructions for the practical application of all the practices, drawn from four decades of teaching Yantra Yoga in the West."
—New York Journal of Books

"An amazing insight into a practice that is traced back 4000 years... While this book is aimed at being a basic introduction, it gave me a good overview of the core concepts that are the basis for this practice and presented it in a way that is user-friendly and straightforward."
—Dana Gornall, ElephantJournal.com

"This is an educational book that has the potential to entice everyone. Even though Asia is not a stranger to Yoga, yet, a book like this is an extremely valuable addition and should be within reach of everyone everywhere."
—-Namta Gupta, BookPleasures.com